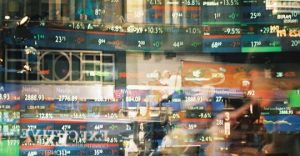 “Investor money is hemorrhaging out of global stock funds at a pace not seen since just after the financial crisis exploded.

“Global equity funds have seen outflows of $12.4 billion in June, a level not seen since October 2008, according to market research firm TrimTabs. Lehman Brothers collapsed in September of that year, triggering the worst economic downturn since the Great Depression and helping fuel a bear market that would see major indexes lose more than 60 percent of their value.

“The most recent exodus, which includes exchange-traded and mutual funds, comes amid worries that the much-touted synchronized global expansion is running out of gas…”

“Chinese fund managers cut their suggested equity exposure for the next three months to a 33-month low, as most of them were on the defensive amid worries over Sino-U.S. trade war and tight liquidity conditions.”

“China’s yuan slipped to a new low on Friday and was on course for its worst month on record, as a bitter Sino-U.S. trade row threatened to rattle the world’s second-biggest economy.”

“China has announced sectors of the economy where it will ease foreign investment rules, with leaders stepping up efforts to portray the country as opening up as they prepare for a possible trade war with the United States.”

“Osram Licht AG became the latest domino to fall in President Donald Trump’s trade war, with the German supplier of headlight components warning that barriers to car imports are weakening the outlook for the automotive industry.”

“A fresh sale of Italian bonds has confirmed that last month’s political turmoil is imposing a cost on the country, as investors demand higher returns to hold its debt.”

“Oil is poised for the longest run of quarterly gains in eight years as fears over global supply disruptions overshadow OPEC’s decision to ease its historic output curbs.”

“Emerging markets are getting walloped by a surge in crude-oil prices, amplifying a downturn already under way amid a U.S. dollar that has mostly rallied in the first half of 2018.”

“The Indian rupee on Thursday weakened past 69 to the dollar for the first time, slumping to an all-time low amid a spike in crude oil prices, foreign capital outflows and a widening current account deficit.”

“The U.S. economy slowed more than previously estimated in the first quarter amid the weakest performance in consumer spending in nearly five years.”

“Deutsche Bank’s US division has failed the second round of the Federal Reserve’s annual two-stage stress tests, designed to assess how well the sector could withstand another financial crisis.”

“Below-investment-grade ABS are on track this year to account for its biggest slice of the overall sector since before the financial crisis. At the same time, the riskiest CLO notes are now a larger percentage of the market than they’ve been in two years.”