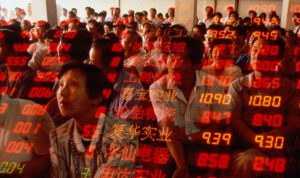 China weakens – the global economy’s engine of growth is stalling out, as they try to rein in credit-growth and cope with Trump’s protectionism:

“China’s expansion looks to have slowed further this month, underscoring the fragility of the world’s second-largest economy as the next wave of tariffs in the trade dispute with the U.S. approaches…”

“Global stocks weakened again Thursday, with shares in Asia falling to the lowest level in nine months, as investors continue to count the cost of trade tariffs and protectionism among the world’s biggest economies. The market’s sentiment was further soured by signals that growth is starting to slow…”

“Emerging market assets sustained a fresh blow on Wednesday, with mounting concern over the escalation in the Washington-led global trade battle. JP Morgan’s emerging markets currencies barometer has fallen every day this week…”

“The next global financial crisis would be caused by higher interest rates, not trade tensions or geopolitics and political factors, said Samy Chaar, chief economist of Lombard Odier, a Switzerland-based private bank, yesterday.”

“Liquidity will be in outright contraction soon, analysts say… That whooshing sound you hear is the draining of $1.4 trillion worth of global liquidity.”

“We’re hitting the panic button here… globally inflated debt is threatening to go ‘Boom’… And there is no escape route available for the GCC, Middle East region, as well. This is a growing multi-faceted international problem that will make the 2008 financial crisis look like a walk in the park, and it’s not going away.”

“Deputy Head of UNRWA’s Workers Union, Amal Batch, warned yesterday that up to 1,000 [Palestinian] employees are expected to lose their jobs due to the financial crisis hitting the international organisation, Al-Resalah newspaper reported. Batch said that the emergency programme, which includes food assistance, temporary work opportunities and others, is at stake due to the financial crisis.”

“Lebanese President Michel Aoun said the Syrian war and regional turmoil were forcing his country to pay more than it can afford.”

“On Wednesday, the government spokesman, Mohammad Baqer Nobakht called on diaspora Iranians to “bring their money to Iran” and urged all Iranians to invest their cash and gold into the economy.”

“Venezuelan President Nicolás Maduro has called Mike Pence a “poisonous viper” after the US vice-president met Venezuelan migrants in Brazil… Earlier this week the EU imposed sanctions on 11 Venezuelan officials following elections in May which the EU said were neither free nor fair.”

“”While the direct macroeconomic impact of the existing measures will likely be small for now, further escalation may hurt growth by impacting confidence or tightening financial conditions.” Escalating trade disputes, which lead to more tariffs or even other measures tied to trade, are “a real possibility,” Sløk wrote.”

“Hurricane Maria exacerbated problems for Puerto Rico’s already-struggling real estate market — creating opportunities and pitfalls alike for would-be home buyers… In the town of Humacao, the median home price fell from $250,000 in 2016 to just $97,250 as of March. A similar situation can be seen in other popular parts of the territory, including the capital of San Juan, where prices have dropped nearly 50% over the past two years.”

“Britain’s chief financial watchdog has warned that contracts worth trillions of pounds between UK and European Union banks remain at risk of collapse following Brexit, after Brussels’ failure to implement protective legislation.”

“The number of homeless children and older people in temporary accommodation [in the UK] has reached the highest level since the global financial crisis in 2007, government figures show.”

“Italian debt sales are at their lowest levels since the height of the eurozone crisis six years ago, as the lingering political tensions weigh on investor sentiment.”