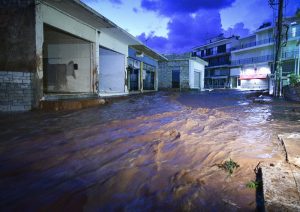 “The town of Mandra, west of Athens, where 24 people lost their lives last November during torrential rains and extreme flooding, was hard hit again.

“…the [Indian] district in the first six months has received 300mm of excess rainfall.”

This is awful: “Rescuers battled heavy rains on Wednesday as they struggled to drain a flooded cave in Thailand where 12 children and their football coach have been trapped for days, as desperate relatives clung to hope the boys will be rescued soon.”

“For the second Saturday in a row, some locations in the Bay Area [California] may flirt with triple-digit temperatures.”

“A northern California wildfire that has burned some two dozen homes and buildings gained thousands of acres on Tuesday as it burned through tinder-dry chaparral, and residents forced to flee a tiny rural community had no idea when they can return.”

“It’s going to be a hot weekend, and it’s only the start of what meteorologists expect to be a scorching summer. On the heels of a heat wave that brought scalding temperatures and smog to the US Midwest and the Northeast last week, the thermometer is set to reach the mid-to-high 90s this weekend in upstate New York and Pennsylvania.”

“Scotland is basking in its warmest June day in more than two decades, according to weather forecasters. On the hottest day of the year so far, temperatures reached 29.4C in Aviemore at 14:00 on Wednesday. Forecasters said they could climb higher before the end of the day – far exceeding the 29C recorded in 1995.”

“Parts of the UK are hotter than Athens in Greece, and on a par with Kuala Lumpur in Malaysia and Rio de Janeiro in Brazil.”

Pictures of the wildfires on Saddleworth Moor:

“The UK Home Counties are on course for their joint driest June on record ever as Britain continues to bake in the sweltering heatwave.”

“It is turning out to be a summer to remember for much of Europe. Record-breaking temperatures have already been experienced in many countries, with May being the warmest in more than a century. June is shaping up to be another record month, both in terms of temperatures and lack of rainfall.”

“The agriculture minister told Polish Radio that in some parts of the country as much as 100 percent of grains were damaged. According to the agriculture ministry, of Poland’s roughly 2,500 local government districts, 2,300 have felt the effects of the drought. Ardanowski on Tuesday urged local governments to estimate losses caused by the exceptionally hot and dry June weather.”

“The Latvian Crisis Management Council on June 26th resolved not to declare a state of emergency in agriculture due to prolonged drought and instead chose to define the situation as “a natural disaster of a national scale”, informs LETA.”

“Newfoundlanders woke up this morning to an unpleasant surprise. A blanket of snow had covered parts of the province and Environment Canada had even issued a warning about road conditions.”