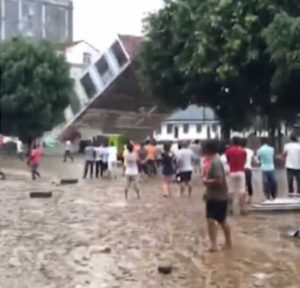 “At least 20 houses have collapsed and nearly 380 people were evacuated in a village in south China due to severe rainstorms over the weekend.

“The torrential rain has ravaged Guangxi, bringing an average precipitation of more than 100 millimetres to various areas and causing floods and landslides.

“120 kilometres away in neigbouring Lingyun county, the extreme weather has caused a landslide which buried a family of six on early Sunday morning…

“Heavy downpours have hit Guangxi since last Wednesday. At least 124,000 people were affected so far and 2,000 residents were relocated in the region, according to Xinhua news…”

“The Vietnam Disaster Management Authority said in a statement Tuesday the disaster caused by heavy rains over the past few days has caused an estimated $6 million in damages to infrastructure, homes and agriculture. Landslides blocked traffic in some areas. More rain was expected, and weather forecasters warned of more floods and landslides as a result.”

“Five people were killed and a girl sustained severe burn injuries due to lightning in Bokaro and Lohardaga district [India], the police said.”

“The record rainfall since Sunday [in Mumbai] exacted a hefty human cost with three boys from the city and its satellite townships losing their lives, and a woman critical after a balcony collapse.”

“The General Directorate of Meteorology has issued a warning that Istanbul and the northwestern Turkey should expect severe storms and hail on Tuesday. Officials have warned residents to expect strong thunder, heavy rainfall and a possible hail during the late afternoon.” [last July’s unexpected hail storm resulted in 150,000 insurance claims]

“The UK will continue to bask in a heatwave this week with temperatures expected to rise to a scorching 33C (91.4F). Parts of the UK are currently hotter than Athens, and on a par with Kuala Lumpur and Rio de Janeiro.”

“Farmers on the south-east coast of Ireland are faced with significant feed-shortages as drought conditions develop, notably in Co. Wexford.”

“MET Eireann reckon Ireland could see it’s second highest temperature ever recorded this week. Mercury is set to rocket all around the country…”

“In essence, the authors argue that the entire Barents Sea has started to behave as an arm of the Atlantic. Unless some external factor re-establishes the layer of fresh water on the surface, “the entire region could soon have a warm and well-mixed water-column structure and be part of the Atlantic domain.””

“”Temperatures [in upstate New York] will climb very close to record levels,” the weather service said. Dew points, the measure of humidity, could reach into the 70s on Sunday, which “will produce dangerously high heat indices in excess of 100.””

“From Oregon to New York, Virginia, and Florida, including many locations in between, toxic algae blooms in reservoirs lakes, and waterways have led to state officials issuing emergency declarations.”

“The governor of California has declared a state of emergency in parts of Northern California due to raging wildfires that have burned 10,500 acres so far.”

“The 2015-16 El Niño brought record-breaking temperatures and the third major drought in a decade to the Amazon, affecting an area 20 percent greater than ever previously observed… “Once a tree dies it will slowly decompose, releasing all the carbon it had stored in its leaves, stems and roots back up to the atmosphere,” explained Lucy Rowland, of the University of Exeter.”

“Thousands of residents in the town of Arauca [Colombia] along its namesake river have been forced to higher grounds and the river overflows and breaks a nearby damn.”

“Since the bill [to protect Chile’s glaciers] was first presented four years, the project had suffered profound changes under pressure, primarily, from mining industry lobbyists…”