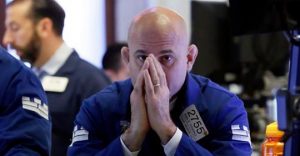 “World debt ratios have spiralled to record levels during the era of super-easy money and markets are showing telltale signs of late-cycle excess, leaving the international financial system acutely vulnerable to a jump in borrowing costs.

“Any reversal in our fortunes could be “quick and sharp”, says the Bank for International Settlements, the global watchdog based in Switzerland and the scourge of dissolute practice…

“Governments are running low on monetary and fiscal ammunition needed to fight fresh shocks or to cope with recession… The rising US dollar threatens to set off a sudden liquidity squeeze and a rash of capital flight from emerging markets, now 60 per cent of the global economy and big enough to engulf the old world if unfolding events are mishandled.

“Banks have higher capital ratios and are safer than in 2007 but the risk has rotated to pension funds, insurers and asset managers overseeing $US160 trillion ($215 trillion) of global wealth – including $US45 trillion of shadow banking – now clustered in “crowded trades” with narrow exits. Any one of these scenarios could trigger a crisis. They might well combine.

“The emerging market debt ratio as a whole has jumped by 63 percentage points in a decade. There are already signs that the financial cycle is turning in several of these countries, including China. A long hangover awaits…

“World asset markets are already stretched. The BIS said credit spreads were “at or below” levels last seen just before the global financial crisis. The reality is that governments have little left in the arsenal if a recession were to hit soon. The BIS has long argued that central banks boxed themselves into a corner during the era of inflation targeting, letting asset booms run unchecked but then intervening massively to prevent the bust…”

“Bank for International Settlements (BIS) said there were already signs that “the ratcheting up of rhetoric” was weighing on investment. It comes as Donald Trump steps up hostility with some of the US’s key trading partners and allies, raising fears of a full-blown trade war.”

“President Donald Trump issued a stark warning to the United States’ trading partners on Sunday, calling on global economies to end to all protectionist barriers, or face a new round of retaliatory measures.”

“China and the European Union vowed to oppose trade protectionism and unilateralism, saying those actions could push the world into recession in an apparent rebuke to the U.S.”

“A slew of negative factors — from the trade war with the U.S. to the risk of a credit crunch — has weighed on China’s financial markets in recent weeks. The Shanghai stock index is on the brink of a bear market after tumbling almost 20 percent from its recent high, while the speed of the yuan’s descent is blindsiding analysts.”

“China’s central bank said on Sunday it would cut the amount of cash that some banks must hold as reserves by 50 basis points (bps), releasing $108 billion in liquidity, to accelerate the pace of debt-for-equity swaps and spur lending to smaller firms.”

By some estimates, [real estate] accounts (directly and indirectly) for as much as 30 percent of [China’s] gross domestic product… Despite reforms in recent years, there’s little question that Chinese real estate is in bubble territory. From June 2015 through the end of last year, the 100 City Price Index, published by SouFun Holdings Ltd., rose 31 percent to nearly $202 per square foot. That’s 38 percent higher than the median price per square foot in the U.S., where per-capita income is more than 700 percent higher than in China.”

“At a central bank conference in Portugal this week, the US Federal Reserve chairman said the case remains strong for more US rate increases – which means trouble ahead for those countries borrowing in dollars.”

“I see an emerging market meltdown is happening in real-time…”

“Trade finance has been stagnant globally for some time, especially after the 2008 financial crisis.”

“”Clouds are gathering over the German economy,” whose industrial engine “began sputtering at the start of the year,” said Ifo macroeconomics chief, Timo Wollmershaeuser. Growth slowed to 0.3% between January and March, half the rate recorded in the previous quarter.”

“After rallying a bit in 2009, [Deutsche Bank’s stocks] recently hit a substantial new low of $11.00… That’s down 91.5% from its all-time high. This, again, only topped a by a few large banks in Italy. It’s a clear sign of trouble for Germany’s flagship bank, and will almost certainly go under in the coming years if it’s performing this badly now.”

“Lenders use repurchase agreements — known as repos — to massage down their assets as reporting dates approach, typically as quarters end, the Bank for International Settlements said in its Annual Economic Report. The practice boosts leverage ratios — the ratio between capital and so-called leverage exposures — allowing banks to report them as being in line with regulatory requirements, it said.

“In reality, this hard-fought agreement is unlikely to restore Greece’s debt to sustainable levels in the long term – nor does it demonstrate anything like a meaningful commitment to European solidarity. On the contrary: The creditors’ rejection of a formal debt write-down means that Greece’s total debt load remains stuck at a staggering 180 percent of GDP, with the agreed extension of loan maturities merely pushing the problem further down the road.”