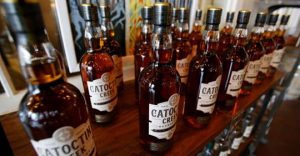 “The European Union slapped revenge tariffs on iconic US products including bourbon, jeans and motorcycles on Friday in its opening salvo in a trade war with President Donald Trump.

“The tariffs, which took effect at midnight, further fuelled jitters on world stock markets that were already alarmed by trade tensions between the United States and China.

“A drop in Japan’s Topix index brought the week’s decline to almost 3 percent, while equities also fell in China and Hong Kong.

“Customs agents across the Europe’s colossal market of 500 million people will now impose the duty, hiking prices on US-made products in supermarkets and across factory floors.

“Brussels imposed the raft of duties on US products worth 2.8 billion euros (£2.45 billion) in a tit-for-tat response to Mr Trump’s decision to slap stiff tariffs on European steel and aluminium exports.

“EU Trade Commissioner Cecilia Malmstrom said this week that the 28-nation bloc was “left with no other choice” but to impose tariffs of its own after the “unilateral and unjustified decision of the US.”

“The International Monetary Fund is likely to revise down its growth forecasts for the euro zone as the area faces higher risks from trade, Britain’s talks to leave the bloc and market jitters over fiscal easing in Italy and other states.”

“The Bank of England has held interest rates at 0.5%, but edged closer to a hike after its chief economist joined two fellow policymakers in calling for a rise. Members of the Bank’s Monetary Policy Committee (MPC) voted 6-3 to keep rates unchanged, with Andy Haldane switching sides to join fellow dissenters Ian McCafferty and Michael Saunders in pushing for an immediate hike to 0.75%.”

“The Bank of England will be allowed to provide more than £500bn in lending to the economy without seeking the Treasury’s permission, in a move that reinforces the strength of the UK financial system as Britain prepares to leave the EU.”

“Hard-line eurosceptics have swept all the key posts in the budget and finance committees of the Italian parliament, shattering the brief calm in the bond markets and guaranteeing a showdown with Brussels over spending rules.”

“Switzerland’s central bank has stuck firmly to its ultra-low interest policy as it battles to curb a strengthening of the Swiss franc triggered by political turmoil in Italy and a dovish European Central Bank.”

Turkey’s economy has been ‘running too hot’ on a platform of unsustainable debt-growth: “…there are warning signs. Some companies are borrowing too much money from overseas. The country is sucking in too many imports, and money has to be found from somewhere to pay for them.”

“As Turks prepare to go to the polls on Sunday, the cost of hedging against fluctuations in the currency over a one-week period is trading close to the highest since the global financial crisis.”

“Mexico increased borrowing costs for the second time this year as higher U.S. interest rates, global trade tensions and the July 1 presidential election have battered the country’s peso, posing a risk to inflation.”

“China’s policy makers and local authorities are taking steps to prevent deepening strains in the $11 trillion bond market from spiraling into a broader systemic collapse. After a series of defaults and a net contraction in bond financing last month, officials have moved to inject liquidity and pressure creditors to negotiate with embattled individual borrowers this month.”

“Australian household debt is now hovering at a record high of about 120 per cent of GDP – among the highest in the world and well above Canada, Britain and the United States. And with the bulk of that debt confined to mortgage debt, and house prices now falling in Sydney and Melbourne, economists are sweating.”

Unusual to see this level of doom in a mainstream publication:

“The past two years, Australian economist John Adams and others have been warning of a looming global crash, based on record levels of public and private debt, ultra-low interest rates, excessive public spending and a massive housing bubble, among other indicators…

While Mr Adams — whose concerns are being quietly acknowledged by a growing number of politicians — believes it’s now too late for government action, he argues there are a number of things ordinary Australians can do to prepare themselves…”

“As the prospect of a trade war threatens to divide the world, a unified front is forming in global markets. It’s just not the type any risk-seeking investor wants to see…”