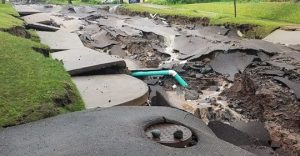 “The rain gauge recorded 1.75 inches of rain in just one minute. If we convert that to a rainfall rate per hour, a common description of rain intensity, we get a crazy 105 inches per hour rainfall rate.

“Of course it can’t rain at that rate for one hour, but picking up almost two inches of rain in one minute is something I’ve never seen…

“…there is some question as to whether this rainfall rate really occurred. Regardless, it was an enormous amount of rain in a short time. If the rainfall rate is correct, it would be a new World Meteorological Organization one-minute rainfall rate record.”

“…the first day of summer has… brought… extreme weather across the [USA].”

“Campers attending the Montana Wilderness School of the Bible near the small town of Augusta were lifted out Thursday after a washed-out road cut off the only exit. Montana was just drying out from spring flooding caused by near-record snowfall over the winter when a storm unleashed rain over the past three days. Texas also saw deluges all week. The soaking in both states comes in stark contrast to the tinder-dry conditions of the American Southwest, which is experiencing drought and an early wildfire season.”

“A woman was found drowned in a creek and cars washed away down streets on Wednesday after a violent storm dumped nearly four inches of rain on parts of western Pennsylvania.”

“A severe thunderstorm watch is in effect for most of the British Columbia Interior on Thursday morning, along with many parts of Northern B.C.”

“Wednesday’s sunny weather resulted in the third-highest temperature ever recorded in the capital city [of Juneau, Alaska] and the warmest day in five years.”

“Brad Rippey, USDA meteorologist, expects temperatures to climb as summer continues. “We’ll continue to see elevated temperatures pretty much across the board, but especially at night and especially in areas where we have had a lot of rain, because it does not allow the temperature to cool off as much at night,” said Rippey. “That is a concern [for crops].””

“Seven people have now lost their lives in less than a week due to flood-related incidents in four different states [in Mexico], including six in the past two days.”

“…there is a chance that the all-time record high temperatures in Ireland – currently set at 33.3 degrees in Kilkenny WAY back in 1887 – could be approached by the fantastic weather incoming further into next week.”

“Last night saw a storm in the Tallinn area [Estonia] which wrought havoc with transport and even contributed to curtailing the last few minutes of ETV’s broadcast of the Argentina-Croatia World Cup football match. The storm, which hit a bit before midnight, flooded several streets and underpasses.”

“Wheat production in Russia is expected to drop to 67.4 million tonnes this year, down 21.5 percent from a record 2017 crop, after adverse weather affected both winter and spring wheat, French consultancy Agritel said on Thursday.”

“The cleanup is continuing in Ivory Coast’s southern city of Abidjan after torrential rain caused deadly flash flooding. According to the country’s interior minister, Sidiki Diakite, 18 people died on Monday as flash floods raged through parts of the city, reaching a depth of 2.5 metres in some places… ‘I’ve never seen anything like it,’ said a resident. His car was swept 600 metres from his home.”

“The weather has been exceptionally dry in the past one week, when the country’s rainfall was 39% below normal. In central India where the monsoon should have reached by now, the shortfall was more than 70%.”