Climate 21 June 2018 the death of seasonality 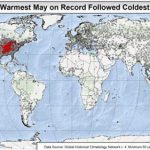 The death of seasonality:

“Did you freeze your a– off in April? Did you sweat your a– off in May? Well, you are not alone. In fact, a record number of stations observed a record cold April followed by a record warm May.

“This is the largest area on Earth to experience a record cold to record warm flip (or vice versa) of temperatures in consecutive months in the last 100 years!”

“Is the extreme weather that wreaked havoc on parts of Michigan’s Upper Peninsula this week a storm event that can be set aside as an aberration? No, says science professor Nancy Langston who teaches at Michigan Technological University located in Houghton, ground zero for the storm.”

“A flash flood watch is in effect for southeastern South Dakota, including Minnehaha and Lincoln counties, as heavy rain is expected through Thursday.”

“At least 15 inches of rain has fallen for the Rio Grande Valley in parts of the area between Weslaco and Harlingen [Texas]. The heavy rainfall caused major flooding, and more is expected to come, according to AccuWeather Senior Meteorologist Heather Zehr.”

Flooding down in Mexico, too:

“Starting in February, a significant decrease in precipitation led to a reduction of surface and ground water in the centre and north of Uruguay. Government figures indicate more than 11,000 people have been affected by this disaster.”

“The potential is increasing for a sweltering heat wave across the British Isles next week. Unseasonable warmth has prevailed across the entire United Kingdom in June, and the most intense heat of the month is yet to come.”

“Poland’s prime minister on Wednesday warned of “very significant” crop losses as the EU country scrambled to help farmers struggling to cope with an unusual spring drought amid soaring temperatures. Farmers in the nearby Baltic EU states of Latvia and Lithuania are also facing drought, with Latvian officials due to consider declaring a state of emergency on Thursday, according to the BNS Baltic News Service.”

All of the nine lakes in the İnsuyu Cave [Turkey], which have even been the subject of myths, have dried up because of drought.”

“Tami Shor, Senior Deputy Director (Regulation) at the Water Authority, told the committee that “almost every addition of water in Israel comes from a desalination system. The main fear is that 2019 will be the sixth drought year and, as a result, in certain places there may be disruptions in the supply of water.””

“The Russian city that will host England’s next World Cup match against Panama suffered dramatic flooding after fierce thunderstorms struck on Tuesday. Fans had been relaxing on the banks of the Volga River, which runs through Nizhny Novgorod, when the balmy sunshine suddenly gave way to torrential rain.”

“Temperatures dropped below freezing several times during the past week as Queensland [Australia] was transformed into a winter wonderland and a Gold Coast suburb shivered through its coldest June morning ever recorded.”