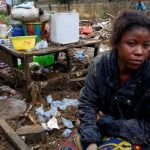 “The torrential downpour which started at 11:00 pm on Monday continued until 6:00 am on Tuesday, causing flash floods up to 2.5 metres (more than eight feet) deep, Interior Minister Sidiki Diakite

“Rescue teams saved 115 people and searches were under way for other casualties, he said, adding that emergency medical centres had been set up across the seaside city.”

“Monday night’s downpour which caused flash flooding in parts of Greater Accra [Ghana] killed three people. They were killed as the raging waters swept across the city of Accra and its surrounding municipalities.”

“Flash floods triggered by heavy monsoon rains in South Asia have killed dozens of people and displaced more than a million, most in north-east India and Bangladesh, authorities said on Tuesday.”

Pictures of some of the damage in Kerala:

“The strong monsoon that has pummeled [Myanmar] with heavy rain since last week has claimed the lives of 19 people while displacing more than 10,000 families across the country, a Department of Disaster Management official told The Myanmar Times on Tuesday.”

“Just a few days of downpours and storms at the onset of monsoon earlier this month triggered landslides and floods [in Bangladesh], killing two and injuring several refugees, as well as damaging thousands of bamboo-and-plastic shelters built on the slopes of muddy brown hills.”

“Sea creatures literally rained from the sky during a massive storm in in [Qingdao, China] while the area was also bombarded with hailstones the size of golf balls.”

“Evacuation shelters in earthquake-hit Osaka Prefecture in western Japan saw a huge spike in the influx of people seeking refuge Wednesday as heavy rain in the region sparked concerns about landslides amid ongoing aftershocks.”

“Brad Shephard’s NSW [Australia] farm has transformed from an inland sea to arid and bare in only two years. The grain farmer has compared video of his land near Forbes from 2016 when it was ravaged by floods, with the same dusty spot this week.”

“Tonga’s budget will meet the country’s needs despite its focus being on long term recovery from February’s Cyclone Gita, the country’s finance minister says.”

“This extraordinary crisis [Cape Town’s drought] is clearly due to climatic causes (an uninterrupted succession of dry years), with aggravating factors, such as high sustained urban population growth… and water sharing between the city and agricultural land.”

“Tropical moisture continues to impact the Texas and Louisiana Gulf Coasts today and that means very heavy rain is in the forecast. Here is the very latest. Parts of Texas already had record 24 hour rainfall on Tuesday. Here are some of the impressive totals.”

“Heavy rain is hitting Southeast Texas as the Midwest is reeling from its own flooding… Mercy Hospital in Rockford had to divert incoming patients to nearby hospitals on Monday after parts of the facility flooded, hospital officials said.”

“A thunderstorm that swept through southern Manitoba last week, dropping hail the size of golf balls and softballs, could cost Manitoba Public Insurance as much as $20 million.”

“Hurricane Maria ripped away part of the steel roof from Carmen Lidia Torres Mercado’s home in the Puerto Rican capital. Nine months later, she is still relying on a blue plastic tarp to protect her home, even with a new storm season already two weeks old.”