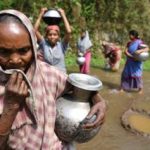 Acute water shortage ? Increasingly, everywhere, but India is certainly up against it.

“The Niti Aayog report, which draws on data from 24 of India’s 29 states, says the crisis is “only going to get worse” in the years ahead.

“It also warns that 21 cities are likely to run out of groundwater by 2020 despite increasing demand.

“Cotton plantations across Haryana, Rajasthan and Punjab may see stunted growth due to dust storms that have raised pollution levels in the north-western region in the last fortnight. The dust has left a thick layer of sand on month-old cotton plants, restricting their vegetative growth.”

“Twenty-two people were killed in weather-related incidents [in India] while torrential rains in northeast states rendered thousands homeless, even as a cloud of dust hung over vast areas of north India on Thursday, bringing down the air quality in Delhi to “severe” level.Fifteen people were killed in dust storms in Uttar Pradesh and seven in rain-related incidents in Assam, Tripura and Manipur.”

“The capital city of Manipur, Imphal has recorded a whopping 89 mm of rainfall in the last 24 hours.”

“Last year’s monsoon was about a quarter below the norm, while the winter rains – from December to March – were about half the average, he said. “Drought-like conditions have emerged over most parts of Pakistan,” he told the Thomson Reuters Foundation.”

“The first rain of the season poured over the Cox’s Bazar camps [housing Rohingya refugees in Myanmar] and informal settlements last week, inundating most roads. One child reportedly died in a landslide, according to a statement from the U.N. Children’s Fund (UNICEF).”

“Heavy rain has battered southern China all week, with more downpours forecast for this weekend. The subsequent flooding has claimed at least four lives as a result of electrocution, according to official estimates, though locals have reported many more.”

“A tropical depression barreling toward Taiwan may develop into a typhoon later today, bringing with it extremely heavy rain, especially in Tainan City, Kaohsiung City, Yilan County and torrential rain to Pingtung County, according to the Central Weather Bureau .”

“Perth [Western Australia] is set to record its wettest June for five years inside the first 19 days of the month – with another cold front poised to deliver a soaking to the city.”

“Wind gusts of up to 90 km/h are battling southern parts of South Australia as a severe cold front moves through the state.”

“The National Oceanic and Atmospheric Administration has issued an El Niño watch, meaning that conditions are favorable for El Niño conditions to develop in the tropical Pacific Ocean within the next six months.”

“Hail the size of baseballs crashed down on one town on the Saskatchewan/North Dakota border, reportedly causing extensive damage to cars and windows.”

“Montana is about to enter another potentially severe fire season with a paltry $4 million in a firefighting reserve fund after paying the bills from last year’s record-setting summer, officials said Thursday.”

“People in the Chicago area can expect three days of high temperatures at or above 90 from Saturday to Monday… On Monday, temperatures may challenge the record high of 95 set in 1929 in New York City and may burst into the 90s in Boston; Providence, Rhode Island; Hartford, Connecticut; and even Portland, Maine… Record highs in the middle to upper 90s may also be challenged in Philadelphia and Washington, D.C., on Monday.”

With dusty desert sprawled across the region, Middle Eastern and north African nations must prepare better for drought as water shortages look set to worsen, the United Nations said on Friday. Over the past 40 years, droughts have become longer and more frequent in the region…”

“Residents of informal settlements battled against flooding on Thursday as heavy rains fell across Cape Town.”

“A reservoir used to dump ore waste has spilled into the Arctic river and turned it red. The shocking case comes two years after the plant’s owners promised the ugly leakage would never happen again.”