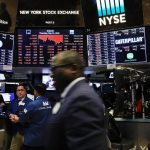 “The U.S. has been engaged in a trade war with China for the last two months. But now the trade war has gone global. From tomorrow, June 1st, Canada, Mexico and the EU will face 25% tariffs on steel exports to the U.S. and 10% tariffs on aluminium.
“The move caused further turmoil on markets already unsettled by Italy’s political crisis. The Dow Jones industrial average dropped 260 points, and the S&P 500 and Nasdaq also fell, by 0.7% and 0.3% respectively. Shares of companies likely to be affected by tit-for-tat responses, such as Harley-Davison, the iconic motorcycle manufacturer, and automobile manufactures on both sides of the Atlantic, also fell. The Euro, Mexican peso and Canadian dollar all dropped versus the dollar, though the Euro recovered in later trading.”

“With President Trump’s incredibly foolhardy decision Thursday to impose tariffs on steel and aluminum from Canada, Mexico, and the European Union, the probability grows of an economic crash this fall. When the likely crash hits (I predict late-October), this nation will be psychologically ill-equipped to handle it. Get ready for rough times. The crash is likely because both public and private-sector debt levels are too high; assets are overvalued; wage pressure soon will massively increase.”

“A stronger dollar is reviving memories of a turmoil and stress that could be triggered by huge debt obligations of emerging markets.” 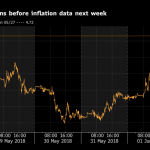 “Turkish banks are learning that all good things come to an end. After piling on corporate loans only a few years ago, lenders are now facing a surge in demand from companies seeking to reorganize debt repayments.”

“Over the past 10 days, Brazil has sometimes seemed a country on the brink of an apocalypse. Usually traffic-clogged highways around Sao Pãulo have been deserted, gasoline stations emptied, and food supplies to supermarkets have dwindled. For lack of poultry feed, there has been a gruesome cull of 100m chickens. There has even been wild talk of a military coup.”

“The Tabung Harapan Malaysia (THM) fund – otherwise called the Hope Fund – to contribute to settling the national debt has collected RM7 million (S$2.35 million) in 24 hours, said Malaysia’s Finance Minister Lim Guan Eng. Asked whether the fund would affect confidence in the economy of the country, he told a press conference on Thursday (May 31) that “if people want to show their patriotism by donating, we welcome it”.”

“…along with China’s growing economic footprint in the world of trade has come an equally large impression in the world of investment. In other words, China has become a significant creditor nation, lending money overseas… China, like the West in the 1980s, will simply find itself counter-party to an awful lot unserviceable debt, and in no position to enforce its claims.”

“Spain’s government was on the brink of collapse Thursday as opponents of Prime Minister Mariano Rajoy appeared to have mustered enough support to oust him in a parliamentary no-confidence vote stemming from a corruption scandal.”

“Salvini and Luigi Di Maio, Five Star’s leader, are both committed to remaking the E.U.’s economic treaties and introducing expansionary tax and spending policies. Both of these things will place them on a collision course with the authorities in Brussels, Berlin, and Frankfurt. And at this stage, neither side seems likely to back down.” 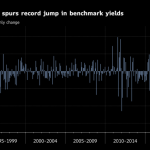 “Italian bonds may have bounced off this week’s stunning losses, but some of the biggest investors say the worst isn’t over.”

“Although Italy’s politics are a byword for crisis they still managed to rattle investors this week. But even more shocking to some was the sudden evaporation of liquidity in the country’s bond market.”

“This week, it emerged that in Europe, banks are giving up their primary dealership roles in dealing European government bonds. This issue threatens to further reduce liquidity and eventually make it more expensive for some countries to borrow money.”

“A US subsidiary of Deutsche Bank has been added to a federal list of institutions with weaknesses serious enough to threaten their survival, a black mark that threatens efforts by its new chief executive to turn around the struggling German lender.”

“Financial institutions ANZ, Deutsche Bank and Citigroup will be prosecuted on criminal cartel charges, Australia’s consumer watchdog says. The allegations concern arrangements for the sale of A$2.5bn (£1.4bn; $1.9bn) worth of ANZ shares in 2015.”

“On May 30th, I accurately measured Venezuela’s annual inflation rate, and for the first time, it breached 25,000%, and today, May 31st, it sits at 27,364% (see chart below). That’s more than double the IMF’s year-end inflation forecast, and there are still seven months left to go until year-end.”