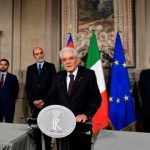 Let’s see what the ECB can do today in terms of hoovering up Italian bonds and calming the markets.

“Nowadays, when sorrows come to the global economy, they would seem to come not as single spies but as battalions. First, we have a full- blown currency crisis in Turkey. Then we have another such crisis in Argentina.

“Before either of those two crises are resolved, we now have Italy plunged into a political crisis that could end up with Italy eventually being forced out of the euro.

“A key difference between Italy on the one hand and Argentina and Turkey on the other is that Italy is a country of systemic importance to the global economy. As such, it has the potential to trigger a global economic and financial market crisis.

“One indication of Italy’s systemic importance is the very size of its economy. Being the eurozone’s third-largest economy, it is 10 times the size of that of Greece. As such, it makes it difficult to contemplate how the euro could survive in anything like its present form were Italy forced to exit that monetary arrangement.

“Another indication of Italy’s importance to the global economy is the fact that it has the world’s third-largest sovereign debt market after that of the United States and Japan, with a total public debt of more than $2.5 trillion.

“Were Italy to default on that debt, as would almost certainly occur were its government’s borrowing cost to increase should Italy leave the euro, it is difficult to contemplate that there would not be a full-blown European banking crisis that would reach America’s shores.

“Among the reasons to fear that Italy could be heading for a full-blown economic crisis is the precarious sate of its economy. Remarkably, Italy’s per capita income is lower today than it was on the eve of the country’s euro adoption in 1999.

“Equally remarkable is the fact that over the past decade, Italy has experienced a triple-dip recession, and it is yet to regain its pre-2008 crisis output level…” 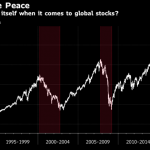 “Now Italy and The Euro are in the cross-hairs.”

“Mark Carney said that the UK economy was as much as 2% smaller than forecasts due to Brexit and estimates British households are more than £900 worse off. The uncertainties over what form Brexit will take also suggest that figure will continue to grow.”

“The funding deficit is growing in the Greek economy, as there was a sharper credit contraction in April, data from the Bank of Greece showed on Tuesday.”

“For companies, the allure of cheap financing can trump common sense. At least that’s what seems to be happening in the speculative-grade bond market, where the debt burden for non-financial firms is now above its previous peak seen before the 2008-2009 financial crisis.”

“”This kind of lending echoes the subprime mortgage boom that preceded the credit crisis of 2008… “Using a line of credit from a major bank, they would offer mortgages essentially to anyone with a pulse.””

“Venezuelan President Nicolas Maduro said on Tuesday he would postpone an overhaul of the national currency to remove three zeroes from the bolivar after banking industry leaders requested more time to ensure cash transactions may proceed.” 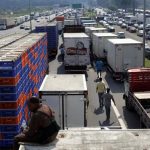 “But now, some media pundits suspect, protesters want nothing less than for Brazilian President Michel Temer to resign, and for semi-public oil company Petrobras to radically change course.”

“While official inflation is 10.9 percent, purchasing power parity allows for a calculation of inflation based on changes in the exchange rate, which is 39.2 percent, Hanke said.”

“As Donald Trump’s tax cuts power up the American economy, rising US interest rates are driving the greenback higher and sucking liquidity from the global economy. That’s hitting emerging market economies, such as Argentina, Turkey and, to a lesser extent, Indonesia on our northern doorstep.

“At the same time, Italians are trying to cobble together a bizarre coalition government that wants to both increase public spending and cut taxes. The Mediterranean refugee crisis has devastated support for the European Union among Italian voters who once saw Brussels as a safeguard against their own unstable governments. The result is a re-emerging euro crisis…

“…did anyone mention the alarming build-up in debt in China, which now takes nearly 30 per cent of our [Australian] exports, compared to only 5 per cent in the early 2000s? Hey, Reserve Bank governor Philip Lowe did, just last week.”

“…it seems like President Trump may be gearing up to launch a trade war between the world’s two largest economies after all.”

Looks like the ECB has bought up sufficient bonds to ease the panic. For now. Obviously none of the structural and political problems Italy faces have gone away. Fingers crossed the ECB does not press on with their QE taper next year.